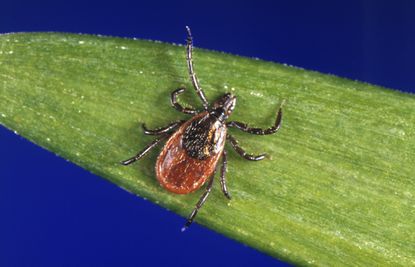 In the United States, several types of ticks can be found today. Not all of them can spread illnesses, but you have to be careful with any ticks as a general rule of thumb. One of the most dangerous and harmful ticks in the United States is the black-legged tick. These black-legged ticks can be harmful and dangerous for most people because they have been spreading a lot of tick-borne illnesses to many people in recent years. In this article, we are going to discuss some popular illnesses that can be caused by ticks. Some of these illnesses can cause serious symptoms in some people.

This is one of the most common diseases from ticks. Lyme Disease is commonly caused by Borrelia burgdorferi. This disease can cause a serious bacterial infection that may affect humans and animals. It is commonly transmitted by the black-legged ticks or Ixodes scapularis.

This infection may cause some symptoms on your skin, for example, rash, aches, and fever. This disease is very common to occur in the upper midwestern and northeastern parts of the United States. Some incidents are also reported along the Pacific coast.

This is another common disease that can be caused by the tick. It is usually transmitted by the dog tick (Dermacentor variabilis), wood tick on Rocky mountain (Dermacentor andersoni), and also the brown dog tick or Rhipicephalus sangunineus. This disease can be found in any area around Central and South America.

Many people with RMSF will have some symptoms, such as headache, fever, rash, etc. This situation can be very deadly, especially when it is not treated immediately. Most doctors will recommend the use of antibiotics for their patients with this RMSF disease.

Some people are suffering from this infection when ticks bite their skin. It is mainly transmitted to humans via tick bites. Black-legged ticks are going to bring bacteria that will cause Anaplasmosis disease in most people. This disease is widely found in many areas of the United States, for example, the northeastern and upper midwestern parts of the United States.

This disease is caused by Anaplasma phagocytophilum bacteria. People with this situation will suffer from some serious symptoms, including, chills, headache, fever, muscle aches, and many other unwanted symptoms. This disease is commonly treated with doxycycline as one of the best drugs for adults and children.

This is another common disease that will infect many people today. This illness is caused by microscopic parasites that can be transferred via black-legged ticks. You can find a lot of people around the northeast and upper midwest who are suffering from this disease. The parasites will infect the red blood cells and cause some mild problems in the human body.

The parasites are called as the Babesia microti. There is no exact treatment that should be given to patients with Babesiosis conditions. People will recover from this disease by using their immune systems.

This disease is caused by the Powassan Virus. It is a tick-borne flavivirus that can be found in many patients around the Upper midwest and also the Northeastern states. Most cases of the Powassan virus disease usually occur around the Great Lakes regions and also the northeast areas. The disease usually occurs from the late spring to the mid-fall season.

No vaccine or medicine can be used to treat this Powassan virus disease. When you have this illness, you may recover yourself by using your immune system. Some symptoms of this disease include headache, fever, vomiting, and weakness. You should reduce the risk of getting this disease by avoiding ticks around you.

There are many other tick-borne illnesses that are common to be found in many people today. It is recommended for you to avoid any tick bites, so you can avoid any of these dangerous and harmful tick-borne illnesses. When it is necessary, you can also apply tick repellent on your skin at any time you travel to other areas of the potential tick habitat. You can also hire the best tick control service around you, so you can remove any adult ticks and nymphs from your properties, such as home or office as soon as possible.